8
The Palace is an unconstructable building in Age of Empires II HD: The African Kingdoms. The Palace has exactly the same stats and appearance as a Wonder, but does nothing in-game and is only available in the Scenario Editor. Most likely it was included to be able to place Wonders on a map as a decoration without having it start the countdown on standard victory mode, or to be able to depict any civilization's Wonder without actually having that civilization present.

There are two buildings that the Palace represents that seem to be unused African Kingdoms Wonders. One is based on the Sankore Mosque and can be seen in this video. It appears that it was the original Malian Wonder. The flame effects for their current Wonder were designed for the original one. As a result, most of the flames do not rest on the building, as their current Wonder is considerably shorter than the original.

The other is based on the Church of Saint George in Lalibela. It appears that it was an unused Wonder for the Ethiopians, similar to Sankore Mosque.

An additional Palace resembles a more wooden Portuguese Wonder. While technically unused, it is simply an older model of the current Wonder, rather than being an entirely different building. 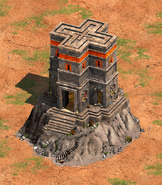 The unused Malian Wonder, now a Palace
Add a photo to this gallery
Retrieved from "https://ageofempires.fandom.com/wiki/Palace_(Age_of_Empires_II)?oldid=313351"
Community content is available under CC-BY-SA unless otherwise noted.