6
The Pagan Shrine is an unconstructable building in Age of Empires II: Definitive Edition - Dawn of the Dukes. They appear in some campaigns and are available in the Scenario Editor (under the "Building" tab).

Despite being used in scenarios as a substitute for the Monastery, they cannot research any technology, and Relics cannot be garrisoned in them.

It may refer to Romuva, an alleged temple in Sambia, one of the regions of pagan Prussia. Here was probably the religious center of all the Baltic pagans at that time. The contemporary Lithuanian neo-pagan movement "Romuva" borrowed its name from the temple.

Despite having 10 garrison capacity, Pagan Shrines cannot garrison any unit or Relics. When allowed to garrison (using map scripts or triggers), units heal 14 times faster than when garrisoned in towers. 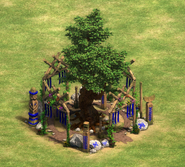