The Padre is a healer hero in Age of Empires III: Definitive Edition that is unique to the Mexicans. In standard random map games, the Mexican player will receive the Padre in the Commerce Age.

The Padre is a unique healer that performs the role of a second Explorer for the Mexicans once the player ages up to the Commerce Age. Like every other Explorer, it can build Trading Posts, claim treasures, and regenerate hit points, which increase with every Age up.

It has more hit points than other healer units and has an increased coin cost, but unlike other units, who simply die when their hit points reaches 0, the Padre will collapse. In this state, the player can either pay 175 coin at the Cathedral to retrain him (this will make him appear at this building) or help him back up on his feet with an allied unit or building; in order to rescue the Padre, he must have at least 100 hit points.

The Padre has a low base attack, which deals additional damage against Treasure Guardians due to being classified a hero. Unlike other Explorers, it cannot build Town Centers, or Forts as the General can. Instead, it can build the Cathedral, the unique Mexican Church.

The Padre gets +50% hit points and attack in every Age up.

As the Padre is unique to the Mexicans, only technologies that they have access to are shown in the following table:

As the Padre is unique to the Mexicans, only their cards and other civilizations' TEAM cards are shown in the following tables:

The Padre uses names that are combined from the first and last names of various 19th century Mexican religious leaders.

Padre image from the Compendium section 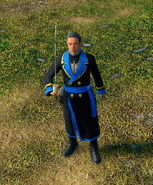