Pachacuti is a campaign in Age of Empires II: Definitive Edition that replaces the El Dorado campaign from The Forgotten. It focuses on Pachacuti Inca Yupanqui (Quechua: Pachakutiq Inka Yupanki; 1418 – 1471 or 1472), the ninth Sapa Inca of the Kingdom of Cusco. During his reign Pachacuti turned Cusco from a small hamlet to a large kingdom which puts them around the same level with the Chimú, and later initiated an era of conquest that expanded the Cusco dominion to nearly the entire length of western South America within three generations, overtaking the Chimú in the process and leaving them as the sole great power on the region as the Inca Empire (Quechua: Tawantinsuyu, "The Four Great Regions").

5
Pachacuti is an infantry hero available in the Scenario Editor in Age of Empires II HD: The African Kingdoms.

In-game, he used to have the appearance of a Kamayuk. Since the Definitive Edition, he has a unique appearance wearing a golden battle helmet, and wielding the royal scepter "topayauri" and a Hualcana. Like other infantry, Pachacuti is affected by all upgrades that affect infantry as well as any other bonuses that affect them. As a hero, he cannot be converted and can regenerate health.

The Pachacuti campaign consists of five scenarios. The player, along with all AI players in the campaign, play as the Incas, and the player color is cyan.

The campaign is narrated by the aging Apo Mayta (Quechua: 'Apu Mayta) one of the generals serving Pachacuti alongside Vicaquirao (Quechua: Wika-k’iraw) who had retired and living deep in the mountains of Andes, as he tells the story to a passing trader. 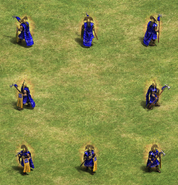 Pachacuti in the Definitive Edition

Pachacuti as a slinger, by Guamán Poma, 1615

An official artwork featuring (from left to right) a Xolotl Warrior, Pachacuti, Cusi Yupanqui, and an Elite Eagle Warrior, with the Malay Wonder (Kalasan Temple) in the background
Community content is available under CC-BY-SA unless otherwise noted.
Advertisement