30
The Overgrown Temple is a type of Temple that appears in a scenario in The New Atlantis, more specifically in Atlantis Reborn.

A Temple to the ancient Titans, abandoned for many years.

After passing through the Sky Passage found in A Lost People, the Atlanteans arrive at a beautiful island. Krios explains that they were favored by the god Oranos and Kronos and that they should repair the two nearby Temples to show their gratitude. Kastor supports this idea as they are better off having these gods look after them than no god at all. These actions anger the Greeks who decide to attack the Atlanteans who in turn retaliate by attacking them.

When the player commences repairs, the Greeks will start their attacks, mostly consisting of Hoplites and Toxotes. Each completed Temple grants a Behemoth, the only "siege weapon" in the scenario.

This ancient Temple has been long abandoned. Workers could clear the brush and debris that has overgrown it, but what will happen if the forgotten gods are reawakened? 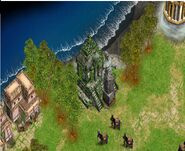 The first Temple, devoted to Kronos 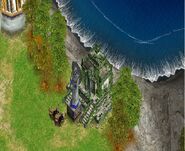 The second Temple, devoted to Oranos
Add a photo to this gallery
Retrieved from "https://ageofempires.fandom.com/wiki/Overgrown_Temple?oldid=304363"
Community content is available under CC-BY-SA unless otherwise noted.