The Outpost is a defensive building in Age of Empires III that attacks nearby enemies and also serves as a drop-off point for Home City shipments. It is available to the European civilizations (except the Russians, who build the Blockhouse), United States, and Mexicans.

Outposts have a fairly high amount of hit points, and a ranged attack that does 1.5x damage to cavalry and shock infantry, so scouting parties should be careful. They also have an anti-ship attack with an extremely long range, which can be particularly powerful if the TEAM Coastal Defenses Home City Card is sent. Outposts are more effective if surrounded by walls and a gate, slowing down enemy units, and effectively protecting the own Outpost until reinforcements arrive.

Outposts can be garrisoned by villager-type units, making them effective at securing resources such as huntable animals and mines, and gaining crucial map control. Unlike the Town Center, garrisoning villagers does not increase the Outpost's attack.

The player can build up to 7 Outposts at a time, which can be increased to 13 with the Extensive Fortifications Home City Card available to most civilizations.

The "Outpost Trick" refers to using a unit with high ranged resistance and/or hit points to distract a Outpost or Town Center while it is being attacked, or troops move past it instead (especially Settler, or Villager for Outposts, Explorer, War Chief, and Monk for both). Against Fortified Outposts, higher hit points are preferable (ranged resistance is useless), and drawing the area of effect fire away from the main force attacking from a different angle. The AI will never manually switch targets with an Outpost or Town Center, or focus fire with them, and most players fail to do so either. Furthermore, loosely grouped outposts and other defensive buildings will have blind spots in their coverage that only allow 1-2 of them to attack simultaneously if attacked from certain angles.

In the Definitive Edition, the "Castrametation" Home City Card allows the Explorer to build Outposts.

The only way for the Knights of St. John to research Fortified Outposts is through use of the Heavy Fortifications card available to them in the Fortress Age. 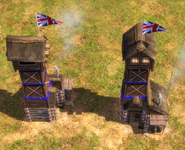 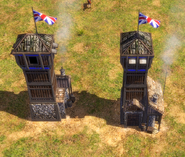 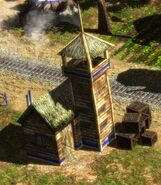