The Otontin Slinger (Macehualtin before the Definitive Edition) is a ranged infantry in Age of Empires III: The WarChiefs that is unique to the Aztecs and can be trained at the War Hut once the Commerce Age is reached.

The Otontin Slinger is a unit with a decent attack, acceptable range and a very fast rate of attack. It is best used against heavy infantry units. Provided with a cotton vest, a sling and a shield, it is the weakest and least expensive Aztec unit. They are similar to Russian Strelets, though they are more expensive and slightly more powerful. The Otontin Slinger is best used in the Commerce Age when the majority of armies are composed of infantry. In the later ages it can be defeated easily by cavalry and artillery, though they can still be very useful against heavy infantry units, especially if well protected.

The Otontin Slinger is the second weakest and cheapest infantry unit overall in the game, being stronger than the Strelet but weaker than the Qiang Pikeman.

As Otontin Slingers are unique to the Aztecs, only technologies that they have access to are shown in the following table:

As Otontin Slingers are unique to the Aztecs, only their cards and other civilizations' TEAM cards are shown in the following tables: 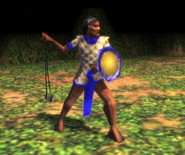