+10 vs Standard building
+6 vs Spearman

6
Osman is a cavalry archer hero available in the Scenario Editor in Age of Empires II HD: The Forgotten. He is based on Osman I who was the leader of the Turks and the founder of the Ottoman dynasty which later became established as the Ottoman Empire (then known as the Ottoman Beylik or Emirate). The state, while only a small principality during Osman's lifetime, quickly transformed into a major world power in the centuries after his death.

In-game, he has the appearance of a Heavy Cavalry Archer but he fires two arrows at once instead of one. Like other cavalry archers, Osman is affected by all upgrades that affect cavalry archers as well as any other bonuses that affect them. As a hero, he cannot be converted and can regenerate health. He appears in the Bapheus scenario as a must-survive unit. 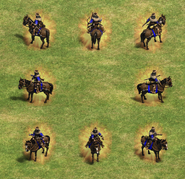 Osman in the Definitive Edition
Community content is available under CC-BY-SA unless otherwise noted.
Advertisement