Hack (99%)
Pierce (99%)
Crush (99%)
The Osiris Pyramid is a campaign-exclusive building that is featured in Age of Mythology.

Where it features, it does not serve any in-game function other than the advancement of the plot, being simply decorative.

There are two Osiris Pyramids featured in the entire game (including the Titans expansion). Despite the cinematic of Cerberus showing an Osiris Pyramid being destroyed, in reality, the structure is invulnerable to damage, and immune to both Earthquake and Meteor.

The first one appears in Let's Go, when the heroes are trying to escape Kemsyt's prison and steal an Osiris Piece Box from the city of Abydos, the center of Osiris' cult.

This structure is encountered once more in the scenario Where They Belong, and is important to the plot's advancement. The heroes, having retrieved all pieces of Osiris, must bring them to the Pyramid so that the god is resurrected.

The second Pyramid appears in the scenario Cerberus, but not in the city of Abydos. This time, it appears in an unnamed Egyptian city (judging from the area, probably Sais, where Osiris' grave was stated to be).

After Kastor and the Atlanteans loyal to him attacked Mount Olympus, the Olympian gods' grip on the Titans was weakened, and as a result, lesser Titans started attacking the surface world, including that Egyptian city.

Cerberus starts rampaging that city and destroys the second Osiris Pyramid, to reveal a Tartarian Gate, from where various myth units are set loose to attack the surface world.

It is written that the god Osiris was cut into pieces and spread all over Egypt. Believers tell the tale of returning all the pieces to the base of the pyramid, so Osiris can be reborn. 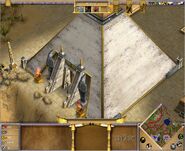 The Osiris Pyramid as it appears in Let's Go

The second Pyramid destroyed, revealing a Tartarian Gate
Add a photo to this gallery
Retrieved from "https://ageofempires.fandom.com/wiki/Osiris_Pyramid?oldid=279975"
Community content is available under CC-BY-SA unless otherwise noted.