All, including the building classes

3
Ornlu the Wolf is a hero animal that appears in several campaigns in Age of Empires II and is referenced in subsequent Ensemble Studios games. As a hero, he cannot be converted and can regenerate health (since The Conquerors).

Ornlu is the only hero unit that can be active while controlled by Gaia and will not switch to player control when found. His in-game appearance is the same as a regular Wolf. Like other wolves, he switches his normal walking speed (and animation) to faster running speed when attacking other units.

References in other games[] 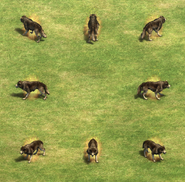 Many views of the hero unit.
Español
Community content is available under CC-BY-SA unless otherwise noted.
Advertisement