Age of Empires Series Wiki
Register
Don't have an account?
Sign In
Advertisement
in: Unique units, Age of Empires III, Artillery,
and 3 more

The Organ Gun is an artillery unit in Age of Empires III that is unique to the Portuguese, which replaces the Falconet, and can be trained at the Artillery Foundry.

Unlike the Falconet which it replaces, the Organ Gun hits multiple times at an enemy target to mimic the Falconet's damage.

While it's slightly cheaper than the Falconet and only costs 4 population, the Organ Gun has less health and damage penalty modifiers against many targets, while Falconet has damage boosting modifiers instead. Organ Guns are still useful in clearing out clumps of units, as Falconets can occasionally leave a few units behind because of their single cannon fire compared to a burst from an Organ Gun. Also, switching from Limber mode to Bombard mode and vice versa is faster with the Organ Gun.

As Organ Guns are unique to the Portuguese, only technologies that they have access to are shown in the following table:

As Organ Guns are unique to the Portuguese, only their cards and other civilizations' TEAM cards that are shown on the following tables: 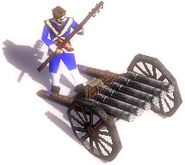 An Organ Gun in Bombard mode 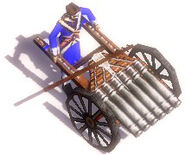 An Organ Gun in Limber mode 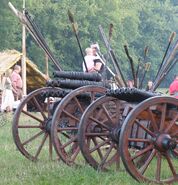 Multiple barreled cannons. The gun on the right is similar to the Organ Gun in the game.
Community content is available under CC-BY-SA unless otherwise noted.
Advertisement