Age of Empires Series Wiki
Register
Don't have an account?
Sign In
Advertisement
in: Age of Empires III, Age of Mythology, Treasure Guardians,
and 2 more

The Orcas in the game are only for display and cannot attack or be attacked. They are usually found in large pods in the sea, mostly in maps set in the Atlantic Ocean, such as Vinlandsaga and Midgard.

1.5
The Orca is about thirty feet long, and as a Treasure Guardian, it cannot be hunted for resources. It is one of the two aquatic animal Treasure Guardians, along with the Great White Shark. Orcas are found alongside Sharks in all coastal maps such as Borneo, Ceylon, Honshu, and Indochina.

Wikipedia has an article about:
Orca 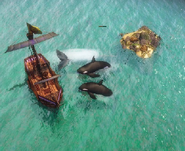 Orcas clashing with a Caravel