12
The Orangutan is a Treasure Guardian in Age of Empires III: The Asian Dynasties. Orangutans are usually found on Asian maps, like Borneo and Ceylon.

The name “orangutan” literally means, “man of the jungle” in the Malay language. These powerful and impressive great apes spend their lives swinging through the treetops of Southeast Asia, specifically on the island of Borneo and in the northern corner of Sumatra.

Rarely touching solid ground, the orangutan travels through the jungles dangling from its long arms and legs, which end in hook-like hands and feet. In the evenings when the orangutan does settle, it builds a new nest every night by bending the fronds of the betel tree. While not as well built as a gorilla, the orangutan is in fact larger in size. It has a body covered in long, striking red hair. Puffy cheeks and a hanging throat pouch full of air sacs that allows the orangutan to produce a unique bubbling call that can be heard over distances close to a mile." 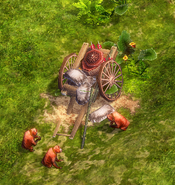 3 Orangutans guarding a Treasure in Borneo

The Orangutan's history portrait
Add a photo to this gallery

x3.0 vs Treasure Guardian
x0.1 vs Villager
Old Doug is a pet Orangutan in Age of Empires III: The Asian Dynasties. He is one one the strongest pets in the game, and can be trained from Marathan Catamarans and Wokou Junks.

In Ceylon (where the player begins with a Catamaran) and Borneo, they can make a substantial difference in Treasure-hunting. Should the player have plenty of food in the early game, it might not be a bad idea to train one or two.

Retrieved from "https://ageofempires.fandom.com/wiki/Orangutan?oldid=279969"
Community content is available under CC-BY-SA unless otherwise noted.