x3.0 vs. Villager
x2.0 vs. Artillery and Siege unit (except in Trample mode)

The Oprichnik is a melee heavy cavalry in Age of Empires III that is unique to the Russians and can be trained at Stable, Fort, and Galleon once the Fortress Age is reached.

Oprichniks are heavy cavalry units unsuited for general combat, but excel at raiding. They do not possess the hit points or damage that other cavalry like the Hussar have. However, they have the highest siege damage out of every non-elephant cavalry unit in-game and enjoy a large damage multiplier against Villagers and a minor one against artillery units. However, using Oprichniks to fight artillery might be ineffective if it's defended by heavy infantry, leaving Oprichniks mainly used for raiding undefended Villagers and buildings. A fully upgraded Imperial Oprichnik can take out settlers in 2-3 hits.

Due to their unconventional damage, Oprichniks should avoid fighting in hand-to-hand combat, as they will surely be killed. Ranged cavalry is also an issue because its multiplier against heavy cavalry.

The Oprichnik starts at the Veteran level, but without the increased hit points and attack.

As Oprichniks are unique to the Russians, only technologies that they have access to are shown in the following table:

As Oprichniks are unique to the Russians, only their cards and other civilizations' TEAM cards are shown in the following tables: 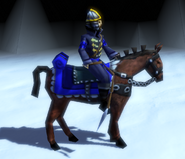 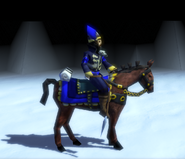