Age of Empires Series Wiki
Register
Don't have an account?
Sign In
Advertisement
in: Atlantean units, Tale of the Dragon, Mechanical artillery,
and 3 more

10-28 feet
The Onager is an Atlantean siege weapon in Age of Mythology: Tale of the Dragon, available at the Palace in the Mythic Age. The Onager functions as a hybrid between the Petrobolos and the Ballista. It fires 2 projectiles each volley.

Kronos reduces Wood and Gold cost by 10% and increases movement speed by 10%.

Meant to act as intermediate between the Classical Age anti-infantry Cheiroballista and the Mythic Age anti-building Fire Siphon, the Onager plays similarly to the Petrobolos, firing stones that cause great damage to ships and buildings, while also being able to cause moderate damage to human soldiers, though it's preferable to use Cheiroballistae in this role.

While cheaper and faster firing than the Petrobolos, the Onager deals less than half the damage to buildings per volley. The damage over time is roughly 33% lower than the Petrobolos. The Onager is also wastly inferior in terms of damage to the Egyptian Catapult with equal numbers and performs noticeably worse even with equal resources. Of course, being a ranged siege weapon means it has a minimum range that can be exploited from melee units, so it must always be escorted. 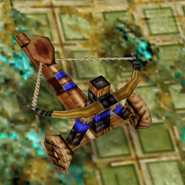 Close-up view of an Onager

Onager with and without Engineers