The Onager is a ranged siege unit in Age of Empires II that can be trained at the Siege Workshop once the Imperial Age is reached. It is primarily used against large groups of enemies. Its high attack and splash damage make it a powerful unit, especially against archers and slow-moving units. Its main offsets are its projectile speed, minimum range, and tendency to harm friendly units caught in its blast. Onagers can attack ground and destroy trees.

Onagers are available to all civilizations except for the Huns and Turks.

Onagers are devastating against archers and slow-moving units, but cannot defend themselves against most melee units. Therefore, they need to be guarded in most situations. Archers are often used because the player's melee units can be damaged by their own Onagers if they are not careful. But archers do not cover the Onager's main weakness adequately, which is cavalry. Therefore, Onagers are also often paired with Halberdiers. That combination is used often with the Celts and Slavs, who both have bonuses affecting Onagers and Halberdiers.

Onagers are effective against naval units. The AI will often send out Onagers as a shore defense to protect its buildings.

While the Onager upgrade is fairly expensive at 800 food and a whopping 500 gold, it provides more attack, +1 range, +1 pierce armor, and slightly more HP. Since The Forgotten, Onagers are able to cut down trees, making them valuable in maps with large areas of forests like Black Forest by enabling the player to attack from behind a forest. It is visually distinguishable by a thicker more reinforced appearance. Overall it is a worthwhile upgrade when multiple Mangonels are being deployed.

In reality, the Onager was invented long before the Mangonel, by the Ancient Romans. The Onager is credited as being the first Torsion Spring or Petraria Arcatinus-type catapult, as all catapults before that are called Ballistae and/or Scorpions.

The word Onager derives from the Greek onagros, meaning "wild ass". It was named after the famously untameable Onager or Asian wild ass (Equus hemionus), because it was said that the engine threw rocks as hard as the animal kicked. 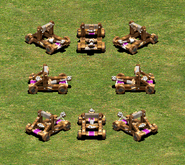 A group of Onagers

The Mangonel line, with the Onager in the middle 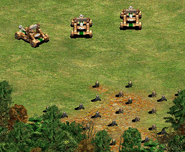 Onagers can cut down trees since The Forgotten.
Community content is available under CC-BY-SA unless otherwise noted.
Advertisement