The Ancient Relics
Odin's Tower is the fourth scenario of The New Atlantis campaign in Age of Mythology: The Titans. The main objective is to destroy the Tower of Odin in order to punish the Norse for coming to Sikyos' defense after the Atlanteans killed General Melagius.

Right after the Atlanteans attacked Sikyos and killed Melagius, the Norse and the Egyptians quickly joined up forces and tried to assist their allies. Kastor and the rest of Atlanteans cannot fight them yet, but Kastor has a plan; he and a token force sailed to Scandinavia. Their goal is to fight through a rough highland with many cliffs, stave off the nearby Norsemen, reach the Tower of Odin (after neutralizing a Lightning Storm that protects it), and destroy it.

On the defensive[edit | edit source]

The player starts in the south, with limited starting forces and four Citizens. Three Citizens should be immediately tasked to gather the nearby resources. On the meantime, task a unit to move to the south of the eastern forest, where four Cows can be herded. The goal is to deconstruct three Temples on top of hills, and replace them with the player's own Temples, in order to neutralize a Lightning Storm that smites any attackers that approach the Tower of Odin.

Build one or two Military Barracks, and train some Murmillos (don't train Arci yet). Don't build any Palaces, as the enemies will almost always choose Heimdall, whose Undermine god power can send the 300 wood and coin invested to a Palace (as well as some Favor) down the drain. After the East Guards player reaches the Classical Age prepare for an attack and be careful of the forest to the east; they will cast Forest Fire, in order to start their offensive. Their offensive will consist of a group of Huskarls, who are quite resistant to building fire and can easily chase and kill Arci.

After this attack, train immediately even more Murmillos, but first, send quickly 1-2 Citizens to wall the passage that leads to the East Guards' lands. Soon, another army, composed of mixed infantry and cavalry forces, and usually including one or two Einherjar will storm the player, and cast Undermine in order to break through any walls (otherwise, they will cast it to the first Palace or Tower encountered). After they are killed, wall back the passage quickly and prepare for further assaults, this time by training Arci, and placing them behind walls.

It is highly recommended to focus on wood on this scenario, as it will be needed much; there are less animals than in other maps on this scenario, and as such, relying on farms is imperative. Also, wood will be needed to mass train Arci, and to build a Market, that will allow for better handling of the player's limited resources. Of course, gold will also be highly needed, and food should be used for Citizens, and to research Levy Mainline Units.

But above all, wood will be needed in order to build Towers and research Signal Fires and Carrier Pigeons, which (along with Focus) are the most important technologies for this scenario, because of a simple fact; Deconstruction requires that a building is in line-of-sight of the player's forces.

On the offensive[edit | edit source]

When the player decides to advance, start with placing Towers on top of the hills, and deconstructing the nearby Hill Fort (it might be better to do this before the green player reaches the Heroic Age, by having the Oracle spot it early in the game).

Should the player want to secure victory, they should slowly and carefully (by walling each new part of the map that is secured) advance up to the unclaimed Settlement to the north. Build a Town Center there, and wall the passages found close to the eastern Gold Mines. This will limit the map control of the green player and limit access to key resources. But, above all the player will have closer sight of ideal spots to Time Shift Towers. These can be used to creep through the hills (where only Throwing Axemen and base defenses can attack), in order to reach LOS of the Temples and deconstruct them.

Should the player want to save time, a decent alternative is to Time Shift a Military Barracks to the central plateau, and train a Contarius that should be converted into a Hero. Use this unit to scout around the red and purple players' bases, and find ideal spots to deconstruct Temples and/or Time Shift the Towers.

Either way, once all three Temples are replaced, simply cast Vortex to the northernmost hill, where the Tower of Odin is located, and attack it. Kastor will comment on the fact it is impervious to normal weapons, but the Oracle will respond that only the power of Kronos can damage it. Immediately, the player will be granted with Deconstruction Wonder, that will strip the Tower to nothing in seconds. Once done so, the player will be rewarded with victory.

Overall, this scenario has a very tough start-up and disadvantages as far as combat options are concerned (as the player is stuck on the Heroic Age), but should the player manage to control effectively this map's features and use Kronos' powers pragmatically, it can completed quickly and painlessly. 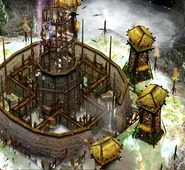 The Tower of Odin being removed by Deconstruction Wonder

The Tower of Odin as it appears in-game

When playing on Titan difficulty, the Norse enemies automatically gain the Guard Tower upgrade for free, which the Norse could not normally get.

Once the Bridle of Pegasus relic has been captured, the player can use the Pegasus to lure the enemy army, which can further simplify the mission.

The default location of the 'Bridle of Pegasus' relic, which would greatly help the player complete this mission faster and easier.

It is ideal to Timeshift non-military buidings (such as Manors) atop a cliff, to maximize the space in the player's initial camp for military buildings.

The opening cut scene to Odin's Tower.
Add a photo to this gallery
Retrieved from "https://ageofempires.fandom.com/wiki/Odin%27s_Tower?oldid=224464"
Community content is available under CC-BY-SA unless otherwise noted.