Age of Empires Series Wiki
Register
Don't have an account?
Sign In
Advertisement
in: Age of Empires II, Unique units, Dawn of the Dukes, Infantry

The armor reduction is removed when the unit is fully healed

The Obuch is the unique unit of the Poles in Age of Empires II: Definitive Edition - Dawn of the Dukes. It is an infantry unit which reduces the armor of enemy units (but not buildings) they are attacking.

Obuchs can be upgraded to Elite Obuchs in the Imperial Age.

The Obuch is a cheap infantry similar in functionality to the Militia line, but with key differences: the Obuch has 20 more hit points than the Long Swordsman and the Two-Handed Swordsman, while the Elite Obuch has 25 more hit points than the Champion, and they have more armor than the Militia line, making the unit highly resilient. The Obuch, even in its Elite form, however, has less attack than a Two-Handed Swordsman and less Line of Sight. Despite having less attack, a fully upgraded Elite Obuch can defeat a fully upgraded Champion due to the durability of the Obuch, while the unit also tears the armor of the Champion with each attack.

The Obuch's main strength is its ability to tear armor of units with each hit by –1/–1 (normal/pierce). Bonus armor classes such as the Cavalry armor of Cataphracts are unaffected. Armor can be reduced to a minimum of 0, so units with negative armor such as Battering Ram (-3/180) cannot lose further normal armor (but can still lose pierce armor). This effect is applied after the Obuch's attack has inflicted damage to a unit. The armor loss is permanent until the unit is fully healed (self, by Monks or by repairers). Upon reaching their maximum hit points, all lost armor is restored.

Notable uses include weakening units with heavy melee armor (such as Teutonic Knights, Boyars, Serjeants and Bulgarian Two-Handed Swordsmen with Bagains). In this role, the player should consider that Obuchs still lose against Teutonic Knights or Boyars in equal numbers, but not in equal resources spent; in the case of Serjeants or Bulgarian Two-Handed Swordsmen, Obuchs can be considered a hard counter just by itself. It can also also weaken units with strong pierce armor, such as Huskarls, Skirmishers, War Wagons, and Elephants Archers. In this case, a Polish player may pair the Obuch with archers, as in a way, the Obuch may be played as a counter to anti-archer/anti-building units. The Obuch can mitigate the usefulness of enemy Blacksmith armor upgrades; however, researching armor against Obuch's still provides some value, unlike against the Leitis.

The Obuch shares typical infantry shortcomings: a slow movement speed and no ranged attack, making them vulnerable to archers (and gunpowder units), siege weaponry, and units with attack bonuses against them (Cataphract, Jaguar Warrior and Samurai). Heavy Cavalry Archers, Plumed Archers, Conquistadors and Mamelukes can be particularly deadly against Obuchs, possessing superior speed and range to kite effectively. Throwing Axemen and Gbetos are also effective, and Battle Elephants and War Elephants due to high hit points and the Poles' lack of Halberdier.

Berserks are a soft counter to Obuchs, since they are fast and can automatically regenerate hit points (and lost armor at full health) after an engagement. Against Berserks, a Polish player may prefer investing into the Knight line instead.

Because Obuchs reduce the opponent's armor, other units with low attack (Skirmishers and Winged Hussars with Lechitic Legacy in particular) might receive a huge increase in damage output. Just like the Vikings, the Poles should prefer combining their unique unit with Arbalesters and Siege Rams because both units cover each other's weaknesses very well, while being manageable to pull off because of top tier economy of both civilizations and low reliance on gold for the infantry units.

It looks as if the Obuch has a huge attack bonus vs buildings, but in the end they come out on par with the Militia line, since the armor-stripping ability does not work against buildings, so they are left with a naturally low base attack.

The Obuch having less attack but +1/+1 armor compared to the Militia line equivalent is actually useful because infantry are supposed to the frontline units, while fragile high damage output units like Hand Cannoneers, Arbalesters and Siege can do the heavy-lifting while being protected for longer.

As Obuchs are unique to the Poles, only technologies that are available to them are shown in the following table:

Obuch, obuszek, or obuszysko is a kind of melee weapon similar to the horseman's pick on the front with a hammer on their reverse head. They were used from the 16th to the 18th century, often by Polish nobility, and often had a spar 80–100 cm long and were carried like canes. They were used as weapons in duels and brawls. 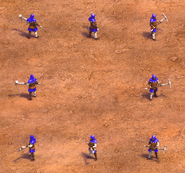