Archer line has +6 attack vs standard buildings
Obsidian Arrows is a technology in Age of Empires II: The Forgotten that is unique to the Mayans and researched at the Castle. It grants Archers and their upgrades a +6 attack bonus against standard buildings.

In update 44725 for the Definitive Edition, it was replaced by Hul'che Javelineers.

Archer armies are usually completely dependent on siege units to deal any damage to buildings, since their overall damage is lower than melee units and buildings naturally have armor. The Mayans are particularly dependent on archers, having a limited tech tree for other unit types and no access to cavalry.

With the addition of Obsidian Arrows, a large group of Mayan Archers actually becomes a severe threat to buildings, since all units in the group can be damaging the same building at the same time without having to surround it, letting them pile on the damage quicker and from a safe distance. For example, Castle Age Crossbowmen with Bodkin Arrow can outrange most civilizations' Town Center, and a group of 20 or so can take one down in a reasonable amount of time. This makes them an extraordinary raiding party if paired with units to handle their counters, such as Pikemen for cavalry or Eagle Warriors for Skirmishers.

Blacksmith upgrades should still be prioritized since they add the same damage against everything plus range while being overall cheaper, and Plumed Archers do not benefit from Obsidian Arrows. When playing in team games and if the Mayan player has a Saracen ally, it also adds the team bonus of +2 attack bonus against standard buildings for the Archer line for a total of +8. 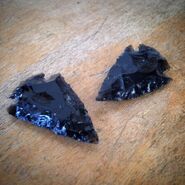