4
The Nordic Swordsman in an untrainable infantry unit in Age of Empires II HD: The Forgotten. It appears in several campaign scenarios and is also available in the Scenario Editor. In the Definitive Edition, the unit is renamed to "Norse Warrior".

The Nordic Swordsman has exactly the same stats as the Eastern Swordsman and only differs from the regular Long Swordsman by lacking the attack bonus against buildings.

Ironically, despite being named "Swordsman" their sprites clearly show them wielding a hand-axe.

Nordic Swordsmen often appear to be serving European players, such as in The Rebellion of Melus (second scenario of Bari), where there are such units serving Melus.

Besides that, in The Elopement (third scenario of Prithviraj), there are Nordic Swordsmen renamed as "Elite Red Guards", serving Raja Jaichand in Kannauj as two pairs. Though it is possible to backstab one, it would alert the partner and the entire guards. 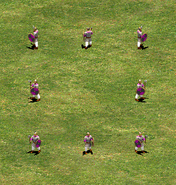 A group of Nordic Swordsmen

A group of Norse Swordsman in the Definitive Edition

A group of Nordic Swordsman (original model before The African Kingdoms)
Add a photo to this gallery
Retrieved from "https://ageofempires.fandom.com/wiki/Nordic_Swordsman?oldid=269230"
Community content is available under CC-BY-SA unless otherwise noted.