The Nootka Clubman is a heavy infantry native warrior in Age of Empires III that can be trained at a Trading Post built on a Nootka settlement.

The Nootka Clubmen are used in the same manner as Pikemen, they are primarily good at destroying buildings. The only stand out feature of the unit is its ability to train very quickly (especially with Nootka Potlatch researched), a tactic best used through a Native Embassy as it can be built near the enemy base to constantly pump out building destroyers.

They are also quite affordable, costing only 85 food and 15 wood. While they are 45 more expensive in Food than Pikemen, this is not much of a hindrance, if a player has advantages concerning Food gathering, such as the Lakota, and the low Wood cost doesn't put a dent into base construction.

They also have decent HP for such an expendable unit, and unlike (non-Spanish) Pikemen, they are more upgradable, slightly making up for their unremarkable multipliers. All in all, they should be considered if one intends to rush with population-free, swarming units. 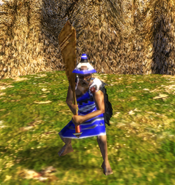 An in-game Nootka Clubman
Add a photo to this gallery
Retrieved from "https://ageofempires.fandom.com/wiki/Nootka_Clubman?oldid=314535"
Community content is available under CC-BY-SA unless otherwise noted.