The Rescue (Age of Empires III)

The Rescue (The WarChiefs)

Betinna Bush
Nonahkee is the sister of Kanyenke, the long-time friend of John Black in Age of Empires III. She was a Mohawk Native American and lived in the village while Kanyenke and John went to help John's uncle, Stuart Black, in defending the colony.

"Nonahkee is the sister of Kanyenke. Soft-spoken and gentle, she has always been a calming influence on both her brother and his friend John Black. Underestimated by her adversaries, her quiet demeanor masks a determined inner strength. With her knowledge of the medicinal properties of herbs, Nonahkee has mended John Black's wounds on more than one occasion."

Nonahkee was thrown into the conflict between the Circle of Ossus and the Black Family as she was allied with John Black. She finally was reunited with her brother and John after defeating the British troops that attacked Nonahkee's village. After the attack, it was revealed that Nonahkee and John had a romance, which they tried to keep secret from Kanyenke.

Kanyenke and John let Nonahkee travel with them but later decided this journey would lead to the death of either Warwick or John and that Nonahkee should be protected from seeing John dying. Kanyenke also admitted he already knows about John and Nonahkee and admits that while he did not think John would be the ideal man for his sister, he would respect her decision. Nonahkee later learned from her brother about John Black's death and was filled with grief until she learned that she was pregnant with John's child. She later gave birth to her son whom she named Nathaniel. Kanyenke helped raise his sister's son.

Nathaniel was raised, and when he was grown, the American Colonists began to rebel against the British. She advocated neutrality, but was ultimately captured by Hessian and Mohawk forces led by Colonel Sven Kuechler. She was later rescued by Nathaniel and Kanyenke, who led a band of their own and Oneida Iroquois warriors. After this event, she remained behind in the village with her brother while Nathaniel left to fight for the Colonials.

Through Nathaniel she became the grandmother of Amelia Black who would finally defeat the Circle of Ossus and avenge her ancestors.

Nonahkee appears as a controllable hero unit in the The Rescue, The Seven Years' War, and The Great Lakes scenarios of Act II: Ice. She uses a bow and arrow to fight and can heal injured units similar to the Priest.

Nonahkee is reasonably durable, with high melee resistance and high hit points, although not as high as most heroes. If she falls, she will collapse instead of dying and needs to regenerate enough hit points to be rescued by allies. She can collect treasures, but unlike Explorers, cannot build Trading Posts and Town Centers, and has no special attack, but possesses a powerful healing ability instead. 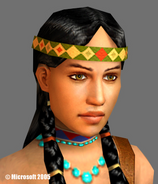 Another image of Nonahkee's face
Add a photo to this gallery
Retrieved from "https://ageofempires.fandom.com/wiki/Nonahkee?oldid=244375"
Community content is available under CC-BY-SA unless otherwise noted.