Age of Empires Series Wiki
Register
Don't have an account?
Sign In
Advertisement
in: Age of Empires III, Towers, Aztecs, The WarChiefs

The Nobles' Hut is a military building in in Age of Empires III: The WarChiefs that is unique to the Aztecs and becomes available once the Fortress Age is reached. It is an improved version of the War Hut which trains Aztec noble infantry.

As Nobles' Huts are unique to the Aztecs, only technologies that they have access to are shown in the following table:

As Nobles' Huts are unique to the Aztecs, only their cards and other civilizations' TEAM cards are shown in the following tables: 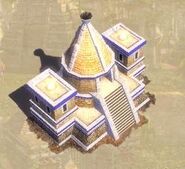