Age of Empires Series Wiki
Register
Don't have an account?
Sign In
Advertisement
in: Age of Empires III, Mercenaries, Fortress Age,
and 4 more

The Ninja is a mercenary melee heavy infantry unit in Age of Empires III: The WarChiefs. It is a stealthy unit that excels against heroes and mercenaries, similar to the Spy.

Ninja are also available to the Japanese in The Asian Dynasties through Japanese Isolation at the Consulate as Ninjutsu-Zukai.

Ninjas are infantry units that are very effective against heroes and mercenaries. Ninjas themselves are mercenaries, so are easily countered by Spies. The Ninja can also use Stealth Mode, which can be detected by an Explorer or Town Center (or other units or buildings).

The Ninja differs from the Spy in that it is classified as a mercenary, in contrast to the Spy, making the Spy very effective against Ninjas. The Ninja also has much higher cost, slightly less speed, much lower Line of Sight and much lower multipliers, but it has more hit points and much higher base damage and siege damage. Ninjas also take up 4 population per unit, despite only costing 200 coin, whereas Spies take up only 1 population per unit, despite costing 125 coin. Ninjas are slightly more deadly against mercenaries, but less effective against heroes, and are far less useful for scouting.

As is the case with Spies, Ninjas are not cost effective against any units other than mercenaries and heroes. However, they do much better against normal units than Spies do, because of their higher base damage. This makes them more well-rounded than Spies. Ninjas are classified as Heavy infantry and Infantry, making them especially vulnerable to skirmishers and artillery.

The Ninja also has worse accessibility than Spies, as Spies are always available from the Church/Mosque from the Commerce Age onward (except for the Dutch Church from the Japanese Consulate), can be sent from the Home City by European civilizations, while the Ninja can sometimes be trained at the Saloon/Monastery, or sent with Home City shipments by certain civilizations.

Ninjas are very useful in the third and fourth scenarios of the Chinese campaign (by choosing Japanese Mercenaries at the Consulate) because most enemies on these maps (namely, Jaguar Warriors and Eagle Warriors) are classified as Native Warriors, which the Ninja has bonuses against.

The Ninjutsu-Zukai is identical to the Ninja, but are easier to access since they can be trained from the Japanese Consulate if Japanese Isolation is chosen. They start with +10% hit points and attack than the regular Ninja, and are automatically upgraded in every Age starting in the Fortress Age (see here for the exact values).

The Ninja speaks Japanese but with different lines than the Japanese civilization's ones, which is also shared with the Ronin. 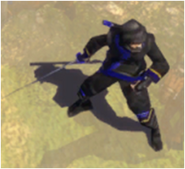 An in game Ninja 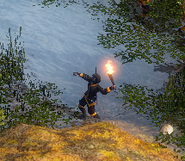 A Ninja in the Stealth mode