Age of Empires Series Wiki
Register
Don't have an account?
Sign In
Advertisement
in: Age of Empires III, Huntables, The Asian Dynasties

The Nilgai is a huntable animal in Age of Empires III: The Asian Dynasties. It is exclusive to the Deccan and Deccan-style Silk Road maps, holds 400 food, and has 20 hit points.

An in game Nilgai 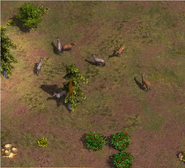 A herd of Nilgai grazing in Deccan