"Aieee! Nidhogg is coming!"
—A Dwarf sighting the beast in Unlikely Heroes

Nidhogg is a Norse Mythic Age god power in Age of Mythology that is available to worshipers of Hel. When cast, Nidhogg, a ferocious dragon, appears.

22
Nidhogg is a Norse myth unit who spews flames in a deadly splash attack that deals both hack and crush damage. As a flying unit, only ranged attacks can harm him.

Nidhogg's devastating attack, huge number of hit points, and high armor almost make him a one-unit army. He can slaughter units and take down buildings with ease, and, being a flying unit, can even take on Titans with impunity. Despite being airborne, the Nidhogg will, however, take splash damage from a Titan while the Titan attacks ground troops. Ranged human units will eventually prevail over Nidhogg, but with dreadful losses, and ranged heroes, his main weakness, can be hard to come by.

However, Nidhogg is not invincible. He cannot regenerate or be healed by any means, so sustained attacks will finish him. Towers and fortresses gain a massive attack bonus against flying units, so keeping Nidhogg in an enemy town too long will wear him down. Ranged heroes such as the Pharaoh (especially the Son of Osiris), Immortal, and Odysseus do serious damage to Nidhogg and, he can die fairly quickly if unsupported. Zeus' Bolt can kill Nidhogg instantly except in the Extended Edition where it only deals damage equal to 2% of his health. The player should therefore protect Nidhogg with an army and avoid direct engagements with Zeus players. If players find themselves losing a battle, they should command Nidhogg to retreat as soon as possible because his slow speed leaves him vulnerable to pursuits from his counters.

In Niflheim, the Norse Underworld, lives a great dragon or serpent, Nidhogg, whose name means "tearer of corpses". He gnaws on the roots of the world ash, Yggdrasil, waiting for Ragnarok. Yggdrasil is also home to an eagle and to an anthropomorphic squirrel named Ratatosk. Ratatosk ferries insults back and forth between Nidhogg at the ash's roots and the eagle living up in the branches.

Fall of the Trident Edit 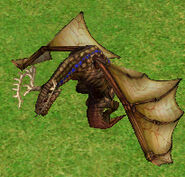 Original icon from the Age of Mythology pamphlet 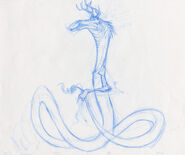 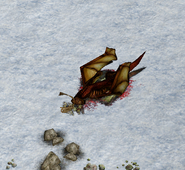 Nidhogg close-up camera angle
Add a photo to this gallery
Retrieved from "https://ageofempires.fandom.com/wiki/Nidhogg?oldid=270369"
Community content is available under CC-BY-SA unless otherwise noted.