Age of Empires Series Wiki
Register
Don't have an account?
Sign In
Advertisement
in: Atlantean units, Myth units, Age of Mythology,
and 3 more

20 feet
The Nereid is a naval myth unit in Age of Mythology: The Titans. It is available at the Dock in the Heroic Age for Atlanteans worshiping Hyperion.

Whirlwind: uses her shark mount to take a bite out of her target, dealing 150 hack damage. Requires 15 seconds to recharge.

Although Nereids are somewhat fragile, their special attack is devastating against other naval myth units and can also sink ships with ease. Due to the fact that they are killed easily they shouldn't engage groups of ships on their own. While their special attack guarantees that they will usually sink at least one, it's generally not worth it as one ship is cheaper than a Nereid. They will need back up from ranged ships if expected to survive. They are weak against ram ships, The Argo, and Heroes, and are especially vulnerable to aerial myth units like the Phoenix and Vermilion Bird, though only ranged Heroes can attack a Nereid unless the Nereid gets too close to the shore.

The Nereids were the fifty nymphs of the sea. Many of them had important roles in mythology. They, like most nymphs, are beautiful creatures. The Nereids were often accompanied by hosts of sea creatures in their roving. But when the gentle nymphs went into battle, they rode fierce sharks who carried their mistresses tirelessly. 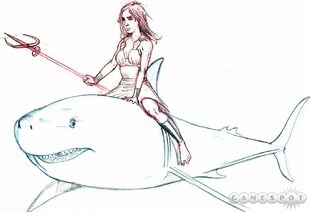 Wikipedia has an article about:
Nereid
Community content is available under CC-BY-SA unless otherwise noted.
Advertisement