The Navajo Rifleman is a ranged infantry native warrior in Age of Empires III: The WarChiefs that can be trained at a Trading Post built on a Navajo settlement.

The Navajo Rifleman is a good choice if the resources are present to add the population free units to an army, though they lack power compared to more standard units from the various civilizations. This is due to their 3.0 firing speed, low LOS, short range, low ranged resistance and slightly higher cost. They have good movement speed for infantry and the ability to stealth in order to setup ambushes on enemy villagers, which is often how they are used by flesh and blood players.

"Native Americans obtained rifles and other firearms in various ways. Some were traded by non-Indians for skins and other goods. Others were provided by U.S. government officials to those living on reservations for the purpose of hunting. And a great number were obtained through raids and scavenging battlefields. Regardless of how Native peoples obtained firearms, Native Americans proved remarkably adaptable in leveraging this new technology to their battlefield tactics.

Even though firearms were quite expensive and often difficult to acquire, by no means were the different tribes always outgunned. In fact, during the Battle of the Little Big Horn it’s believed that the Sioux were equipped with several hundred repeating rifles - offering them a significant firepower advantage over the Springfield single-shot carbines held by Custer’s men." 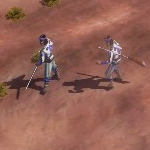 Two in-game Navajo Riflemen
Add a photo to this gallery
Retrieved from "https://ageofempires.fandom.com/wiki/Navajo_Rifleman?oldid=262913"
Community content is available under CC-BY-SA unless otherwise noted.