Trading Post on a native settlement (except for the Native Americans*)

The Native Embassy is a military building in Age of Empires III: The WarChiefs that becomes available once a Trading Post is built on a minor civilization settlement and the Commerce Age is reached (except for the Native Americans, who can build the Native Embassy by default). It trains native warriors from the minor civilization(s) the player is allied with as well as Wild West outlaw units (Native Americans only).

The Native Embassy allows native warriors to be trained closer to the frontline, and at a location that a player desires, rather than the random locations of map-specific settlements.

Note that if the Trading Post on an allied settlement is destroyed, access to that settlement's native warrior will be lost.

The Villager requires the Kinship Ties Home City Card to be trained at Native Embassies.
Units with an asterisk (*) can be trained by Native Americans since update 23511. 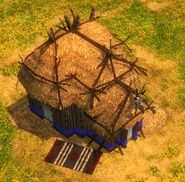 An in-game Native Embassy
Add a photo to this gallery
Retrieved from "https://ageofempires.fandom.com/wiki/Native_Embassy?oldid=326964"
Community content is available under CC-BY-SA unless otherwise noted.