Nathaniel Black is an American Revolutionary War hero and a member of the Black family. He is the main protagonist of Act I: Fire in the campaign for The WarChiefs.

While he is first seen in cameo at the end of Act II: Ice in the Age of Empires III campaign as a baby, Nathaniel is first seen as an adult trying to make peace among Iroquois when the American colonies and the British descend into war, forcing various Iroquois to choose sides. However, his plans are disrupted when the Hessian officer Colonel Sven Kuechler kidnaps his mother.

After rescuing Nonahkee, Nathaniel fights alongside the colonists in the American Revolution, becoming good friends with George Washington. As the war progresses, Nathaniel and Washington fight together in many battles, and Washington helps Nathaniel chase and defeat Kuechler. In return, Nathaniel decides to keep fighting alongside Washington until the war ends at the climactic Battle of Yorktown, which results in American victory.

With Independence won, Nathaniel returns to his village as a poor man having spent all his fortune on clothes and food for his men. He dies in 1812, and a statue is erected depicting him in the final cutscene of the act. Then, Chayton Black is seen paying homage to his grandfather, setting up the plot for Act II: Shadow.

Like other heroes, Nathaniel has many hit points, but if he falls, he will collapse instead of dying and need to regenerate enough hit points to be rescued by allies. Similar to Explorers, he can collect treasures and build Trading Posts, but cannot build Town Centers. 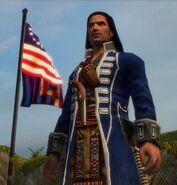 Nathaniel in front of an American flag. 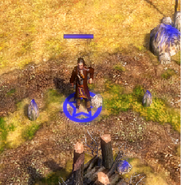 Nathaniel Black as a unit in the campaign
Community content is available under CC-BY-SA unless otherwise noted.
Advertisement