The mod is focused on the events revolving around the Napoleonic Wars in Europe and all around the globe. The Napoleonic Wars were chosen as the mod's theme because they were regarded as the most influential military events during the time period of Age of Empires III, which did not cover Europe, Africa, and Western Asia as historical spheres of interest.[2]

Currently the mod's webpage is down, and the former Project Leaders work now with Forgotten Empires, making a new release of the mod very unlikely. A lot of features and ideas has been implemented in the Definitive Edition and subsequent expansions.

Napoleonic Era features new gameplay elements, returning a few well-missed elements from Age of Empires II, like removing the limit of builders working on one building, improving the arsenal and new abilities for Explorers. In addition to the 14 regular civilizations already offered by Age of Empires III and its two official expansion packs (The WarChiefs and The Asian Dynasties), the Napoleonic Era presents the players with an additional set of new playable civilizations that hold their own unique units, technologies, buildings, home cities and tactical abilities.

To fit the new theme of the wars occurring in Europe, Napoleonic Era includes many new random maps, e.g. from Europe, America, Northern Africa, Western Asia, and even other places around the world, many of them consist completely new native allies like Bavarians, Finns, or Greeks.

All European civilizations in Napoleonic Era can build the University for 300 wood in Industrial Age, which grants access to powerful technologies and elite units, whose availability varies depending on civilization. These units all have in common that they usually have many hit points, inflict a lot of damage, cost no less than 3 pop and can only be obtained from single, expensive technologies. The elite units are:

Italians and Germans are two civilizations that get unique versions of the University, which cost more resources, take longer to build, but are also more powerful.

The Reichstag is the German version of the university, that costs 450w and takes 60 seconds to build. It has all features of a University, but additionally offers 6 banner armies from historically relevant states from within the Holy Roman Empire containing some units that can usually not be built by Germans (i.e. Grenadiers or Dragoons). Among regular units there are also German themed natives and mercenaries featured in these armies such Hessian Jaegers, Landsknechte or Black Riders. This new system called Reichsarmee can be used to build large powerful armies or to just complement the regular German troops.[5]

Italians can build the Basilica, that costs 500 wood and 500 coin and takes 240 seconds to build. The Basilica gives trickles to resources, gives many more unique upgrades and can spawn its unique church units for free.

The United States can build a consulate using a frontiersman and ally with 3 Native American civilizations instead of European ones. These are the Sioux, Cherokee and Iroquois of which each features 2-3 different armies with native units and technologies. Contrary to the Asian Consulate an ally can only be picked 3-4 times. Thereafter the player will be stuck with the last ally. Re-allying with a people allows the same improvements to be researched again which can be useful when trying to obtain Dog Soldiers from the Sioux and Light Cannon from the Cherokee. The Iroquois focus more on siege weapons and anti cavalry, the Sioux focus on cavalry and the Cherokee are focused on ranged units

The Keep is a unique Austrian Fort that can be built by explorers and is weaker but also cheaper than the ordinary Fort. The build limit is increased by sending keep wagons from the home city. They are capable of training Austrian infantry, cavalry, Falconets and the Landsknecht, but will initially only train Landsknecht, Grenzers and Line Infantry unless an upgrade at the Keep is researched. Up to 4 Keeps can be present at one time.

The Ranch can be built by the United States and is a mix of stable and livestock that can produce sheep.

The Look-Out is an American tower that is used for reconnaissance purposes only as it provides additional LOS and is built by the Frontiersman. They have a build limit of 3.

The Italians can build 2 different statues that possess a unique ability, which can either boost nearby units or slowly generate XP.

Fusiliers, Hand Cannoneers, Inquisitors and Sappers are the only new units that aren't trained from the University.

The following unique units were added in Napoleonic Era:

The artificial intelligence (AI) in Napoleonic is based on the fan-made Draugur AI, but has been optimized for the mod by the team's member Cliff Kang. The AI takes use of the added mod content and is generally harder to beat than in the original game. The Napoleonic Era AI was optimized for Hard difficulty and is known for:

Napoleonic Era 2.1.7b has automatic installers available for Windows and Mac OS X.[6] To be installed successfully, it requires either a fully patched Age of Empires III plus the two expansions The WarChiefs and The Asian Dynasties or the Age of Empires III Complete Collection on Steam. The mod preserves the playability of the original game and the possibility to play in ESO2 without requiring uninstallation.[7]

Napoleonic Era, that was originally started as a German project, gained early popularity already with its first version 0.1 being featured at the most popular German games magazines GameStar[8] and PC Games.[9]

Napoleonic Era 2.01, released in July 2009, has been the most successful mod version so far in terms of downloads. Even though older uploads of the mod have mostly been removed from the net already, the success can still be seen at some remaining uploads such as on GameFront[10] or the German software site CHIP,[11] at which it is still ranked among the top 50 mod downloads of the week.[12] 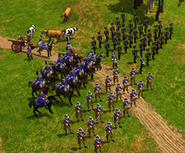 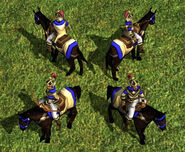 Mangudai in the Napoleonic Era mod for Age of Empires III