Napoleon Bonaparte (1769–1821) is the AI personality of the French in Age of Empires III. He was the emperor of the French and is voiced by Andre Sogliuzzo.

Napoleon is a confident leader who is sure that he will prevail over his enemies. He often refers to his military campaigns.

In the early Ages, Napoleon will start off with archaic infantry. As he advances into the later Ages, they will get swapped by the more predominant Hussars and Cuirassiers and Falconets. Napoleon seems to favour using Crossbowmen as his ranged infantry, even though he has access to Royal Guard Skirmishers. Anti-cavalry units will easily shred his armies.

Napoleon also uses Outposts to defend himself, and will occasionally utilize the Fortified Outpost upgrade, though he usually keeps them at the frontier level. He has the best economy and can field robust, usually well upgraded armies as he has a very fast gathering rate because of the Coureur des Bois. 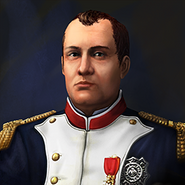 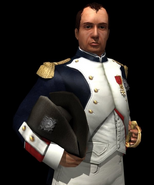 Wikipedia has an article about:
Napoleon Bonaparte
Community content is available under CC-BY-SA unless otherwise noted.
Advertisement