The Naginata Rider is a melee heavy cavalry unit in Age of Empires III: The Asian Dynasties that is unique to the Japanese and can be trained at Stables and Atakabunes, and by Daimyos. It wields a naginata in combat.

A non-traditional cavalry unit, the Naginata Rider functions as an in-between of the Hussar and the Lancer of the European civilizations. It is very effective against archers and Skirmishers, but unlike the Lancer, not particularly effective against its traditional counter heavy infantry (the multipliers cancel each other out). That is compensated by being slightly better against artillery, which it counters well, and significantly better against other cavalry, thanks to its higher base attack (like a Hussar).

Naginata Riders have the same weaknesses as most hand cavalry units, being vulnerable against ranged cavalry (such as Dragoons and Howdahs). Howdahs can take them down in a single shot, so Naginatas should stay away from them.

If the player researches Honored Naginata Rider and sends the Bloody Harvest card from the Home City, a Naginata Rider kills an unupgraded Longbowman in a single blow.

If this advantage is used well, enemy archers are rendered ineffectual. Use Ashigaru Musketeers or Samurai to attack the enemy melee units head on, while the Naginatas sneak around the back to kill any archers who are firing at the Ashigarus/Samurai. When used this way, the Naginata Rider can be especially cost effective.

As Naginata Riders are unique to the Japanese, only technologies that they have access to are shown in the following table:

As Naginata Riders are unique to the Japanese, only their cards and other civilizations' TEAM cards are shown in the following tables: 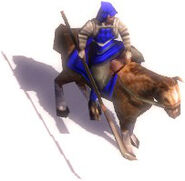 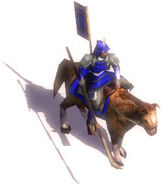 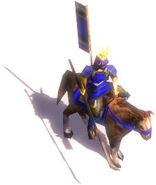