Blockhouse (Russians, in groups of 5)

The Musketeer is a ranged heavy gunpowder infantry in Age of Empires III that can be trained at Barracks, Forts, and Galleons. It is armed with a smoothbore musket to fight other infantry at range and a bayonet to fight cavalry in melee combat.

Musketeers are available to the British, French, Italians, Portuguese, Russians, and Spanish.

Musketeers are ranged heavy infantry that are especially effective against cavalry in melee due to a damage multiplier. They are vulnerable to artillery and Skirmishers.

Musketeers are stronger in melee combat due to the attack speed of melee attacks, also with thanks to their high hit points and good melee resistance. This is particularly improved with Socket Bayonet. However, this is not always practical as Musketeers are slow, and the opponent may simply decide to make their units run away.

Musketeers' range attack is relatively strong, and due to the firearm animation it is possible to hit and run. However, it is short ranged compared to other ranged infantry and fires at the default rate of 3.0s, which is slower compared to certain archer units such as the Longbowman. They also have a decent siege attack, which makes them one of the most versatile units in the Commerce Age. While they are more expensive than archaic units, Musketeers are simple to mass produce due to their low coin cost and are cheaper than more specialised units such as Skirmishers or the Halberdier. Therefore, they can be powerful generally, especially in vast quantities.

In The WarChiefs, Spanish Musketeers become the most damaging, thanks to the Unction effect. 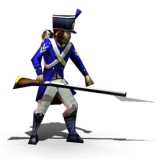 The in-game stats of a Veteran Musketeer

The in-game stats of a Guard Musketeer

The in-game stats of an Imperial Musketeer 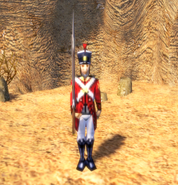 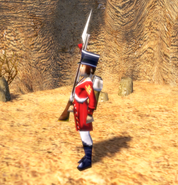 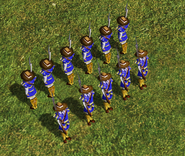 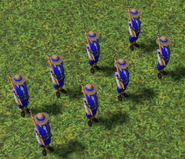