The Musket Rider is a gunpowder light cavalry in Age of Empires III: The WarChiefs that is unique to the Haudenosaunee and can be trained at the Corral once the Fortress Age is reached.

The Musket Rider is used best against Villagers and cavalry. They have a very high speed and can even employ hit-and-run tactics against Hussars. They have a large attack that does x3 vs. cavalry and x2.5 vs. artillery. Concerning ranged cavalry, they are well-rounded in most respects, but they have two slight advantages. The first is their low food cost, allowing a Haudenosaunee player to invest more in food-hungry units, such as Aennas and Villagers. The second is their x2.5 anti-artillery bonus, allowing mixed groups of Kanya Horsemen and Musket Riders to crush massed artillery.

However, as the Haudenosaunee have limited Home City Cards and technologies for their cavalry, they may seem mediocre in later game, and can fall behind other similar, more upgradable units. They have only two cards that benefit them: "Cavalry Combat" and "Cavalry Hitpoints", both essential for cavalry-oriented civilizations, and they also come an Age later. On top of that, they only have two upgrades, Ranged Cavalry Caracole, and Horse Secrets.

This apparent weakness can be more than compensated for by using a few unique Haudenosaunee advantages – namely the War Chief Aura and War Ceremony. By combining these two advantages, Musket Riders max out in the Imperial Age (without TEAM cards or native technologies) at 506 hit points and 57 attack, both of which exceed Imperial Jinetes. They are also faster than most other ranged cavalry due to Horse Secrets. They are also quite a bit cheaper than most other ranged cavalry, but due to the weak late-game economy of the Haudenosaunee, it can often feel like an expensive, premium unit. In this regard, Tomahawks are often favoured over Musket Riders late-game, due to their cheap cost.

The Musket Rider starts at the Elite level, giving them +25% hit points and attack.

As Musket Riders are unique to the Haudenosaunee, only technologies that they have access to are shown in the following tables:

As Musket Riders are unique to the Haudenosaunee, only their cards and other civilizations' TEAM cards are shown in the following tables: 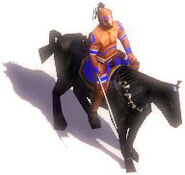 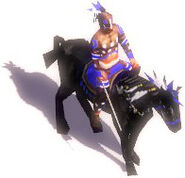