Age of Empires Series Wiki
Register
Don't have an account?
Sign In
Advertisement
in: Atlantean units, Classical Age, Age of Mythology,
and 3 more

16 feet
The Murmillo is the primary Atlantean infantry unit in Age of Mythology: The Titans. They are very similar to Greek Hoplites in most ways, though they are a little faster.

Murmillos are fairly well-rounded as they are strong against both cavalry and weaker infantry units. However, they have poor pierce armor and will fall easily to a squad of Arci. Counter-infantry such as the Hypaspist will also destroy them with ease.

The Murmillo is not a specialized unit. They are not particularly fast, though they do have a good line of sight, and can be trained quickly and in large numbers. One Murmillo can be used to scout up ahead if Contarii are not available. However the Murmillo is superior to the Contarius in that they can be deployed in large numbers. As with all Atlantean units they can be upgraded to Heroes to make them good against myth units and secure Relics.

18 feet
Like all Atlantean human units, a Murmillo can be converted into a Hero at any time, provided the player has sufficient resources.

Atlantean warriors and soldiers were known for their discipline and drill. A Murmillo, or fish, because their shining, finned helmets made their complex movements in combat look like a school of swimming fish. They have a rivalry with and respect for the Destroyers, who consider the Murmillo beneath them - as a fisherman would a fish.

In the Roman Empire, Murmillos were gladiators who fought in the arena. The Murmillo was supposed to depict a Roman Legionary and was equipped with a sword and shield. They were often pitted against either a Hoplomakhus (hoplite), Thraex (Thracian) or a Retiarius (fisherman).

Murmillo seen from further away

Concept art of the Murmillo, which resembles the Fanatic more than the actual (Gladiatorial) Murmillo. Also wielded a Fishing Hook-esque Pike. 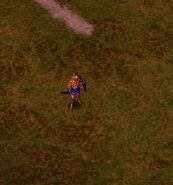