Age of Empires Series Wiki
Register
Don't have an account?
Sign In
Advertisement
in: Age of Mythology, Tale of the Dragon, Heroic Age,
and 2 more

15 feet
The Mounted Archer is a Chinese mounted archer unit in Age of Mythology: Tale of the Dragon. Unlike most archers, it has an attack bonus against cavalry.

The Mounted Archer is excellent for hit-and-run tactics against any relatively slow, non-ranged unit. Their speed and ranged attack enables them to keep up with targets trying to get away, even cavalry units. On the downside, it is technically classified as both an archer and a cavalry, and will take additional damage from counter-units of either type. This makes them especially vulnerable to towers with Crenellations researched. They receive additional damage from most standard cavalry due to their dual classification, so care must be taken to ensure they are able to fire from range. This can be mitigated slightly by using the Jade Rabbit technology to better enable hit-and-run micromanagement. 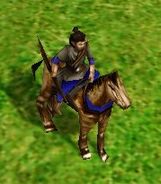 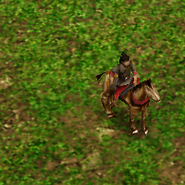 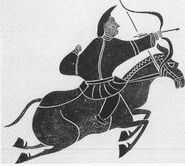