The Mosque is an economic building in Age of Empires III that is available to the Ottomans and Hausa. Its primary purpose is to contain technologies that improve the Ottomans' automatic Settler production right from the Exploration Age. It also generates 0.8 XP per second. Secondarily, it also functions as a Church (available to other European civilizations in the Commerce Age), but with the healers named as Imams instead of Priests.

As Ottomans start with a lot of wood and the upgrades are quite powerful, especially in a long game such as Treaty, it can be a good idea to place the Mosque early and obtain the training time upgrades as soon as possible. However, it is not necessary to research the Settler cap upgrades until the appropriate cap is reached.

Units with an asterisk (*) are added in The WarChiefs.
The Surgeon requires the "Master Surgeon" Home City Card to be trained at the Mosque.

For the Hausa, the Mosque can be built with the Mosque Builder, who is available when the player establishes an Alliance with the Moroccans. The Mosque will unlock two more technologies in the University: Argan Tree Planting, and Arma Garrisons.

As the Mosque is available to the Ottomans and Hausa, only technologies that they have access to are shown in the following table:

As the Mosque is available to the Ottomans and Hausa, only their cards and other civilizations' TEAM cards that are shown on the following tables: 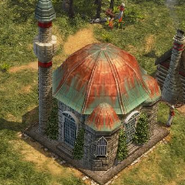 An Ottoman Mosque before the Industrial Age

An Ottoman Mosque after the Industrial Age

Mosque in the Industrial/Imperial Age