8
The Mosque is an unconstructable building in Age of Empires II, identical in appearance to the Turkish Wonder (the Selimiye Mosque). The Mosque can do nothing apart from giving shelter to up to ten units that can garrison in it. The Mosque is available in the Scenario Editor (under the Other tab) and makes a few campaign appearances.

Even though the Mosque only has 600 HP, it is quite bulky, because every hit only causes one damage (even hits from a Trebuchet). The only units that can deal more than one damage per shot are Mangonels.

It appears in the An Arabian Knight scenario of Saladin, where the player must get a soldier to the Mosque in Cairo, so that the Egyptians change their diplomatic stance with him to ally.

A Mosque also appears in the city of Bathinda, in the Battles of Tarain scenario of the Prithviraj campaign. 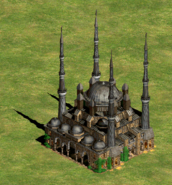 A Mosque in-game
Add a photo to this gallery
Retrieved from "https://ageofempires.fandom.com/wiki/Mosque_(Age_of_Empires_II)?oldid=313332"
Community content is available under CC-BY-SA unless otherwise noted.