"Artillery that fires an exploding shell at buildings or ships."
—In-game description

The Morutaru (Japanese: モルタル, katakana for "mortar") is an artillery unit in Age of Empires III: The Asian Dynasties that is unique to the Japanese and can be trained at the Castle once the Industrial Age is reached, and by Shogun Tokugawa. It is the Japanese version of the Mortar.

Compared with the Mortar, Morutaru are slightly cheaper and take up 1 less population per unit. They also cause less siege damage and move slower than Mortars when in Limber mode but also move faster when in Bombard mode.

With the Morutaru Range card, Morutaru acquire an amazing 46 range (and 50 LOS). The only Mortar that beats its range is the Portuguese one, with 50 range and 54 LOS.

As Morutaru are unique to the Japanese, only technologies that they have access to are shown in the following table:

As Morutaru are unique to the Japanese, only their cards and other civilizations' TEAM cards are shown in the following tables:

"In the late sixteenth century, when armies of Japan returned from their military campaigns on the Korean peninsula, they brought with them many lessons in siege acquired from their sophisticated Korean enemy. Unfortunately, use of the mortar, a military art that the Koreans had perfected, was something in which the Japanese did not appear interested. They continued their usual practice of importing European cannons. However, in 1639 the Japanese played host to visiting Dutch advisors who demonstrated a mortar for the Shogun and his representatives. The demonstration caused an uproar even though not one shell fired hit its intended target." 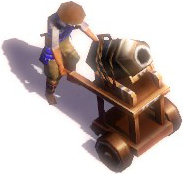 The Morutaru's history portrait
Add a photo to this gallery
Retrieved from "https://ageofempires.fandom.com/wiki/Morutaru?oldid=258834"
Community content is available under CC-BY-SA unless otherwise noted.