The Mortar is an artillery unit in Age of Empires III that can be trained by European and American civilizations at the Artillery Foundry once the Industrial Age is reached.

The Mortar can be used effectively against buildings and ships, but it is unable to attack land units. They deal greatly inferior damage to Petard, though they can attack from great range and aren't suicide units, giving them more strategic value in a greater number of situations.

They play similarly to the Trebuchet from Age of Empires II in that they have very long range and must be packed up to move and fire.

"TEAM Engineering School" is also available to the Swedes (in the Industrial Age). 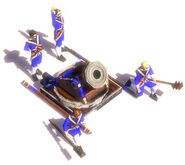 A Mortar in Bombard mode 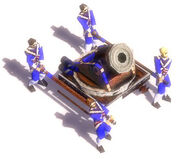 A Mortar in Limber mode 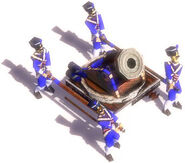 A Howitzer in Bombard mode

A Mortar fixed on top of the Monitor

Mortar from 1864 on a railroad, during the US Civil War

Mortar in the original game and in the Definitive Edition