The Morochuco is a revolutionary outlaw in Age of Empires III: Definitive Edition that is unique to Peru.

All Comancheros will be upgraded to Morochucos once the namesake Home City Card has been sent. Compared to Comancheros, Morochucos have the following differences:

As Morochucos are unique to Peru, only technologies that their base European civilizations have access to are shown in the following table:

As Morochucos are unique to Peru, only their base European civilizations' cards and other civilizations' TEAM cards are shown in the following tables (for the base civilization, non-TEAM cards will only be applied if they are sent before revolting):

Morochucos are cattle-tending horsemen in Peru's Andes Mountains who are comparable to cowboys in North America. Wearing clothes adapted to the cold Andean environment, morochucos descended from the Almagristas and are renowned for their bravery and prowess, as well as their participation in festivities such as horse racing and bullfighting. 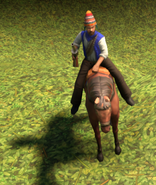 A Peruvian Morochuco
Community content is available under CC-BY-SA unless otherwise noted.
Advertisement