Alive (as of Act III: Steel)

The Falcon Lands on Malta

Morgan Black is a fictional Knight born into the Black family of Scotland, who later joined the Knights of St. John. He is the protagonist of the Act I: Blood campaign in Age of Empires III.

Morgan Black was born the son of a village smith and joined the Knights of St. John at an early age. Morgan is unmarried and has no family ties binding him, so he has devoted his life to the knights' order. The fact that he speaks Scottish Gaelic, as do Highlanders, suggests that he came from what was then a Gaelic speaking part of Scotland, most likely Galloway rather than the Highlands and Islands, which were tied up in clan warfare and were less likely to produce knights for international orders.

Over the campaign, Morgan fights alongside his commander, Alain Magnan in many battles such as the defense of Malta against the Ottomans. Morgan and the Knights of St. John soon battle in the New World against the Ottomans, pirates, Spanish, and finally, the Circle of Ossus and their Boneguard. After realizing that Alain Magnan betrayed the Knights of St. John by allying with the Circle, Morgan allies himself with Sahin The Falcon and Elisabet Ramsey to destroy the The Fountain of Youth, thus thwarting the Circle's plan.

Later in life, it is suggested he has children with Elisabet, which continues the Black lineage for the following acts of the game. In Act III: Steel, Amelia Black encounters an Old Coot, who is pleased to see the Circle has been completely defeated "in just one lifetime", hinting that he is indeed an aged Morgan Black. While it is not explicitly stated whether he is immortal, it is suggested that he drank water from the Fountain of Youth to extend his life well beyond what is normal.

As the protagonist of the Act I: Blood campaign, Morgan Black appears in every scenario. He also appears as the Old Coot in the Act III: Steel prologue and epilogue cutscenes and he makes a cameo in the epilogue video of the Act I: Fire in which he can be seen watching his great-grandson's victory.

Morgan Black fights with a sword and can use Oberhau, a technique from the German school of fencing that damages all enemies in a wide area around him similar to Swashbuckler Attack but with a slightly larger AOE and does more damage against treasure guardians.

Like other heroes, Morgan has many hit points, but if he falls, he will collapse instead of dying and need to regenerate enough hit points to be rescued by allies. Similar to Explorers, he can collect treasures and build Trading Posts, but cannot build Town Centers.

Morgan also grants access to Morgan's Flagship during Pirates! and The Ottoman Fort.

Oberhau: Morgan Black performs a sweeping hand attack that does 200 (600 against Treasure Guardians) melee damage to the target enemy and other enemies in a radius of 4 around him. 45 seconds cooldown.

Morgan Black as the "Old Coot" 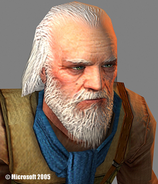