The largest member of the deer family, moose are found in the northern reaches of North America, forming small herds for the summer and larger herds for the winter. They have long, thin legs and shoulders that are humped and support a short, thick neck and a large, elongated head. The males have an unusual set of flattened antlers that they use aggressively during mating season. Moose are strong swimmers, swimming lakes and even diving to reach underwater roots." 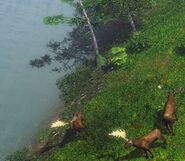 Moose found in Northwest Territory
Add a photo to this gallery
Retrieved from "https://ageofempires.fandom.com/wiki/Moose?oldid=226409"
Community content is available under CC-BY-SA unless otherwise noted.