Age of Empires Series Wiki
Register
Don't have an account?
Sign In
Advertisement
in: Age of Empires II, Montezuma, The Conquerors

Montezuma is the Aztec campaign in Age of Empires II: The Conquerors that focuses on the three city-states that ruled the Valley of Mexico, the Aztec Empire (also know as Triple Alliance or, in classical Nahuatl, Ēxcān Tlahtōlōyān) from 1428 until the combined forces of the Spanish conquistadores and their native allies under Hernán Cortés defeated them in 1521. It is named after Motecuhzoma Xocoyotzin or Montezuma II (c. 1466 – June 29, 1520), the 9th Tlatoani of Tenochtitlan and the 6th Huey Tlatoani or Emperor of the Aztec Empire at the time of the Spanish arrival.

The Montezuma campaign consists of 6 scenarios. The player plays as the Aztecs and the player color is green.

Despite its name, the campaign's narrator and arguable real protagonist is Cuauhtemoc, Montezuma's eventual successor as the (last) emperor of the Aztecs.

Montezuma II as depicted in the Florentine Codex 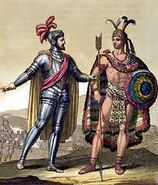 Montezuma and Cortéz
Community content is available under CC-BY-SA unless otherwise noted.
Advertisement