Age of Empires Series Wiki
Register
Don't have an account?
Sign In
Advertisement
in: Classical Age, Myth units, Age of Mythology,
and 3 more

0 feet
The Monkey King is a myth unit in Age of Mythology: Tale of the Dragon. It is available to worshipers of Sun Wukong from the Classical Age.

Monkey Kings are fast, affordable, and well armored additions to a skirmish. They can accompany soldiers into battle and use their whirlwind ability to prevent the enemy from escaping when they realize they stand no chance. Their high armor helps them withstand damage during early game attacks when units are not yet fully improved while allied Halberdiers or Chu Ko Nu make the kills. Thanks to their speed, Monkey Kings can also accompany Scout Cavalry in the hunt for enemy worker units who wandered from the main town and prevent their escape with, again, their whirlwind ability.

While they do decent damage, Monkey Kings should only be trained if players are aiming for an aggressive Classical Age victory. They have very low hit points and will die quickly if overwhelmed by anything. If an early victory is not assured, players are advised to stop the production of Monkey Kings and advance to the Heroic Age where stronger Myth Units await.

The Monkey King, or Sun Wukong, was born out of a magic stone, which had been sitting on top of a mountain for a long time, drawing to itself the powers of earth and heaven.

When he came out, he had the physical appearance of a monkey, but the abilities of a god. He was able to travel at lightning speed and possessed an immense strength. With the powers, however, also came a sense of pride and cheekiness.

After descending the mountain, Sun Wukong would soon become the king of the monkeys and animals he had befriended, and as he traveled, he would be quick to smugly take up any challenge. Bold and cheeky, he faced various lessons and often became reprimanded as a result for his audaciousness. In the end, however, the Monkey King learned how to attain enlightenment and was rewarded for his service and strength. 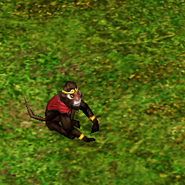