11 meters (conversion)
10 meters (healing) feet
The Monk is a Chinese hero unit in Age of Mythology: Tale of the Dragon.

The most distinguishing feature of the Monk is that it is capable of converting hostile units, not unlike the Monk in Age of Empires II. The Monk can only convert human military units, not siege units, ships, myth units, etc., although worshiping Shennong allows Monks to convert non-Titan myth units as well. (Note: Conversions fail if the player has reached/exceeded their population cap.).

Conversion stats for each monk (adding more monks do not seems to affect conversion time):

(The myth unit value is from "proto2.5.xml" file, which might mean seconds needed to convert)

The Monk can also heal friendly units at 7.5 HP per second. Range: 10 meters.

The Monk can carry Relics.

The monk is stronger overall than the Egyptian Priest and deal decent damage with an attack bonus against myth units. However, due to the fact that it is a melee unit, combined with its slow speed, it takes a more supportive role in combat. It is capable of healing allies at a decent rate, so players may send their armies into battle and regularly retreat to a handful of waiting monks to restore their HP. On the other hand, monks can also be brought closer to the battle field to make use of their conversion ability. Monks convert enemy units at a decent rate and the conversion process can stack up on a single unit so opponents may see their forces quickly being turned against them.

Converted units from other cultures will lose all of their upgrades (except Armory upgrades) and do not benefit from most Chinese technologies so they should not make up the bulk of an army. A possible exception to that rule would be in Supremacy battles when players rely on a Wonder to win. Players can mass Monks entirely and leave a decent population gap open to make conversion possible. Any siege, hero or (not counting Shennong) myth units remaining will be quickly taken out by the converted army or even the monks themselves. 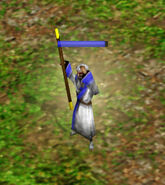 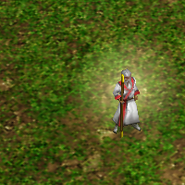 Player 2 Monk
Add a photo to this gallery
Retrieved from "https://ageofempires.fandom.com/wiki/Monk_(Age_of_Mythology)?oldid=284181"
Community content is available under CC-BY-SA unless otherwise noted.