The Slavs, Saracens, and Spanish also have unique technologies that benefit their Monks. Byzantine and Teuton Monks are also fairly effective, benefiting from both Monastery upgrades and team bonuses.

The first and arguably most important role they serve is to collect Relics. A Relic is a special object that when garrisoned in one of their Monasteries, the player possessing it will receive a small but continuous trickle of gold over time, roughly equivalent to one Dark Age Miner. The more the Relics the player collects, the more gold they generate. Unlike mining, Relics do not run out of resources. Most importantly, training Monks quickly and effectively in a game with standard victory becomes critical following the Castle Age since collecting and holding every Relic for a brief time period is one of the many ways to win the game.

The second purpose Monks serve is to convert enemy units. Opinions can differ widely about the use of conversion in the game. However, converting a unit minimizes the enemy's forces while simultaneously increasing their own army. In the Castle Age, Monks can be effective in backing up rushes without the opponent having the ability to research Faith and being able to outrange every single unit but the Longbowman.

Good Monk civilizations (such as the Aztecs, Burmese, Saracens, Slavs, Spanish, and Teutons) can even perform a Monk rush. That can be dangerous, because the attacked player most likely does not have any anti-conversion technologies researched and the Monks are affordable due to the high amount of gold being freely available. The Portuguese can also rush with Monks, despite lacking Illumination, as their Monks are 15% cheaper, costing 85 gold.

In the Imperial Age, Block Printing becomes available, helping the Monk to keep up rangewise, but the armies of the players are getting much stronger in the Imperial Age, which relatively makes the Monk much weaker. Almost all infantry and cavalry units are able to kill them in three hits, archers normally only need five. Siege units also make short work of Monks. That is a huge problem for players relying on Monks. Also, with Faith being available, the use of conversion is significantly decreased. Another problem is that conversion requires a high amount of micromanagement due to the fact that Monks do not convert on their own and cannot be instructed to do so (there is no aggressive stance function for Monks). That means that the player always has to be present and execute the conversion manually. In later stages of the game, when the battle is larger and taking place on multiple locations, it is almost impossible to handle aggressive Monks adequately. If there is just one main battlefield, it can still work, however, if the player concentrates on converting key units such as Paladins, War Elephants, or Boyars and guards the Monks well.

Monks are able to heal friendly units (with a speed of 1 HP per 0.4 seconds). That comes in especially useful for resilient units that the player wants to keep taking hits. Monks are often paired with archers, because they are easy to control and be effective at the same time with the defensive stance mode. Siege weapons are a heavy threat to this combination.

Players should have around two to ten Monks depending on the size of their forces, to heal wounded units free of charge during battle. Monks should be kept out of danger and the wounded units should come to the Monks, not the other way around or else they are likely to be targeted.

"Religion was a powerful force during the Middle Ages, whether it was Roman Catholicism of the West, Islam in the Middle East, or Buddhism in Asia. The missionaries and teachers of religion were mainly monks, men who took vows of poverty and who dedicated their lives to spreading their message. Middle Age conflicts often derived from religious differences and were led or supported by contingents of monks on each side. The Crusades, for example, were multiple attempts by European Christians to wrest control of the Holy Land from the hands of Islamic Arabs. Large numbers of monks accompanied the Christian crusading armies."
—Age of Empires II manual 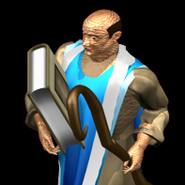 A render of the regular Monk model
Add a photo to this gallery
Retrieved from "https://ageofempires.fandom.com/wiki/Monk_(Age_of_Empires_II)?oldid=265039"
Community content is available under CC-BY-SA unless otherwise noted.