The Monitor is a military naval vessel in Age of Empires III that can be trained at the Dock once the Industrial Age is reached.

Monitors are available to European and Asian civilizations except the Knights of St. John (Act I: Blood campaign).

The Monitor has a mortar fixed on the front for bombarding beaches or fortifications, but is weak against other ships and anti-ship units. It has an ability where it fires a more powerful shot that covers more range. The Monitor is most effective against buildings, as it deals 10 times as much damage against them compared to units. Any building that is deemed a threat can also be targeted; however, they are essential for destroying shore defences such as Forts. Monitors are resistant to building fire due to being classified as a siege unit; Outposts and Town Centers do half their damage against them. This marks a power swing towards invading navies and away from the shore defender starting in the Industrial Age.

Monitors are expensive, but may be acquired via the TEAM Monitor cards. If sending the 2 Monitor Card, be careful with the unit limit, as training any (without Admiralty) will make the total after the shipment exceed the unit limit, which prevents the card from being sent.

The Monitor is generally considered better than the Ironclad for long-range attacks. With the European Cannons or Offshore Support cards, Monitors can outrange all other ships. However, this range bonus only applies to its basic attack; the long-range attack is a fixed amount and damage versus ships is low (unless modified via the tactics discussed below).

If a puddle of water is large enough to build a Dock, then it can usually hold a Monitor. This can grant easier control over a large area of a landlocked map, and obliterate or severely weaken any enemy units that encroach on the territory. Hot Air Balloons or the Spyglass ability can be used as a spotter for bombarding targets behind enemy walls that prevent passage of normal units.

The following includes Dock, Monitor (2), and upgrade costs. It does not take into account Spanish Unction, TEAM cards, or minor native civilization cost reduction cards for buildings and upgrades. It also does not include the Admiralty card for a third Monitor, which would add 800 wood, 200 coin to the costs (or subtract that, if a shot every 60 seconds is satisfactory). Keep in mind that the area of effect is very large, so when targeting tightly packed buildings click on the ground, not an individual building, to better spread the damage to multiple buildings. With armies, target a unit in the middle rather than the edge of the formation, or the area between the frontline and supporting cannons, for maximum effect. Unless leading a moving enemy army, in which case, use a best estimate.

Note: Water Ceremony for the Aztecs and Haudenosaunee, and Charging Ceremony for the Lakota can not be used to buff a Monitor, as maps with such puddles of water do not support naval unit TEAM cards as they lack a water delivery point.

The highest attainable damage for the Monitor's regular attack is 339.04 (3,390.4 vs buildings, 67.808 vs villagers), and the long-range attack is 847.6 (8,476 vs buildings, 169.52 vs villagers) in 4v4 games. It requires all upgrades and damage cards, including Spanish Unction, and a British (Monitor Combat), Chinese (Improved Warships), and Indian (Shivaji's Tactics) ally sending their TEAM cards. British Monitors will inflict 228 regular damage, and 570 long-range shot damage. India 224 regular damage, and 560 long-range. China 216 regular damage, and 540 long-range damage. With timing practice, such a team can lay down rapid bombardments in a large number of areas simultaneously via staggering the long-range shots of their ships while the Spanish focus on the enemy armies exclusively. The four civilizations also synergize well in another significant way explained here. 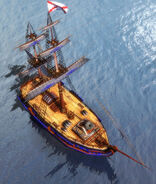 Monitor sailing through the Caribbean

A Mortar fixed on top of the bow of the Monitor

A Monitor navigating in the Bayou