Mongolia is a map that features rough cliffs and elevations, unusual for a steppe area. Mongolia has a decent number of chokepoints, thanks to the abundance of rough cliffs throughout the map.

Trees exist in neat amounts, typically medium-sized bunches. Gold and Stone Mines appear in regular numbers. Wolves are present and scattered, Relic number on the map is the standard and varies with the map size.

The start-up resources is the standard one (2 Boars, 8 Sheep, 6 Berry Bushes, normal piles of gold and stone) with the exception that, unlike most maps, there is a second herd of 3-4 Deer (or Ibex) not too far from the Town Center; lucky players may get 8 passive huntables in total.

The fauna found is typical Eurasian, and includes Sheep, Deer (also Ibex since the Definitive Edition) and Wild Boars. The landscape itself is unusual, as it combines dirt with low grass, snow and pine trees.

Depending on the placement of the hills and cliffs, it might be a good idea to try a Turtling strategy. In some areas the space might be open enough to discourage this, but in most cases is a very viable strategy. Walling specific chokepoints may even make the map more "labyrinth" like, and sometimes walling some of those places may mess with the pathfinding of opponent units intending to perform a raid. Players that choose to turtle early then may perform a Boom strategy for the middle and late game. The placing of the cliffs may also enable players to easily wall key resources like gold and stone as they might be sandwiched between cliffs, and use those for later in the game.

In any case, if players choose to turtle and enclose themselves with walls, they must support this with Castles and Towers, as well as with archers and siege units. In this case, it is important to notice where the higher grounds are (the position of the cliffs has high or low value on the "elevation" attack bonus, depending the sprite it shows and the side the unit or building is placed), so the player may place Castles and towers on higher ground whenever possible.

Rushes may work, but unlike in maps like Arabia, the player must be quick in order to get ahead of the opponent and prevent them from walling; otherwise, the rush may become a waste of time and resources. In this sense, cavalry rushes tend to be more effective than infantry or archer rushes in the Feudal age. A Dark Age rush with Militia may also work, as this is the fastest way possible to start an attack. Most of the action regarding combat usually occurs in the Castle and Imperial Ages.

Foot Archers in Mongolia may counteract their natural weakness to cavalry as they can use the cliffs to protect themselves by firing from behind and other times they can be placed in a "u" shaped cliff, preventing melee cavalry from attacking the archers from behind. The exception here is the Steppe Lancer, as this cavalry unit has +1 range, so it can attack from behind another unit.

Civilizations that may struggle in Mongolia include:

The Age of Empires III version is included in The Asian Dynasties expansion, as one of several Asian maps.

Mongolia is a map with a rich resource region to the northernmost taiga-steppe. There is a Trade Route that runs along the top of the map; sometimes the route will have 3 sites, sometimes 4 and even 5. There are lots of resources to the north, making it a great idea to take control of early on; as resources at the starting positions tend to run out early.

Silver Mines are found throughout the north. There are a reasonable amount of Treasures available, most notably one close to the Town Centers, that features a trapped Mongol Scout guarded by a Lion-Tailed Macaque. It's a great idea to get this treasure early, to help scout out the map.

To the south lies a semi-arid desert-steppe with scarce trees, but also many Gold Mines scattered around, which is one of the reasons for which this region must not be ignored in favor of the north. The other is the fact the open spaces can be used to rush more easily, because of the few obstacles.

In general, this map is suitable for rushing due to the resources, but it can also be used as a Treaty map, because of no obstructions on walling off.

It's also a good idea to ally with the Natives, as they can be quite useful; there will be either four Native Trading Posts or five in big team games or big free-for-all games. Native religious settlements include the Shaolin Temple and Sufi Mosque.

A Shaolin settlement located in the map 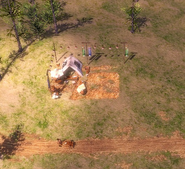 A trade route running through the north 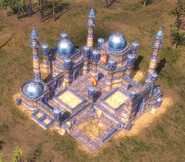 A Sufi Settlement located in the map

The arid steppe located in the south 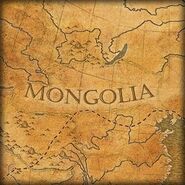